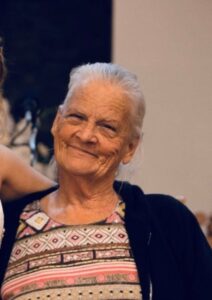 Brenda Diana Cronic, age 77, of Winder passed away September 6, 2022. Diane loved her children and grandchildren so much. She loved going to Dairy Queen for a biscuit then going for a drive to look for deer around the Ft. Yargo park with her husband Phillip. She always enjoyed working outside in her yard, you could always see a towel around her neck when she was out there working in the yard or garden. She was a huge Nascar fan and was always keeping up with the race schedule so she wouldn’t miss a race. There was never a time you would walk in her house and not have a jar full of Hersey Kisses waiting for you. Diane never missed calling her granddaughter Jessie to talk about Dancing With The Stars and The Bachelor but not before calling Jessie’s husband Josh to fix her TV. She made sure to be at every pageant Jessie competed in. She was her best friend and biggest cheerleader. Her grandson Hunter also known as her “Hunter Boy” would always keep her on her toes. You could always hear her telling him to “get off the video games and come outside to play.” If anyone was Diane’s twin, it was her daughter Tresa. Tresa being the baby of the family, Diane would let her getaway with anything. Diane was so strong with a little spitfire. Her family would say she was “wild as a buck and kept the roads hot”. The last few years her daughter Lisa lived with her. Lisa had open heart surgery and would both take care of each other. One night, Lisa needed to go to the ER via ambulance, Diane looked at Lisa and asked “What’s the number to 911?” She was full of life and always made everyone laugh. She loved spending time with her nieces Cindy and Connie. When they were younger Cindy and Connie would come over to spend the night with Diane, Lisa, and Tresa. Diane was always up for adventure. After dark, they would go ride around, going to McDonald’s and chasing ambulances. Diane made a huge impact on everyone in her family’s life. She was the glue to our family. We will miss her more than ever but we know she is in heaven having the biggest reunion with her husband Phillip, parents, and brothers. Survivors include her son Tim Buff of Athens; daughters Tresa Dudley and husband Jason of Winder, Lisa Hinkle of Winder; brothers James Peppers of Bethlehem, Charlie Peppers of Auburn; sisters Faye Day of Auburn, Ivey Peppers of Stockbridge; grandchildren Hunter Dudley of Winder, Jessica Smith and husband Josh of Grayson, Meagan Hinkle; great grandchildren Cj, Colton, Jayden, and Pj. Brenda was preceded in death by her parents J.W. and Orene Peppers; husband Phillip Cronic, brothers Lawrence Peppers, Joe Peppers, Jerry Peppers, Guy Peppers.  Services will be held 5:00 pm Saturday September 10, 2022 at Lawson Funeral Home Chapel. The family will receive friends 4:00 pm to 6:00 pm Saturday September 10, 2022 at the funeral home. Arrangements by Lawson Funeral Home 4532 Hwy 53 Hoschton, Ga 30548. lawsonfuneralhome.org. 706-654-0966.