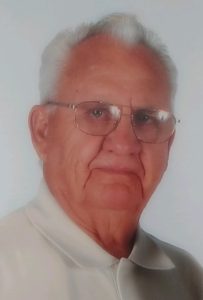 September 16, 1929 – July 11, 2020.  Gervis Edsell Griggs, age 90, of Lawrenceville, GA passed away peacefully on Saturday, July 11, 2020, only three months after Bobbie, his wife of 65 years, passed away. Edsell was born in Monroe, NC to the late Gervis Edgar Grigg and Merlie Hewitt Grigg.  Edsell grew up in Newton, NC and attended Newton-Conover High School until joining the US Navy in 1947. He served as a hospital corpsman at various Navy hospitals stateside through most of the Korean War. He was an electrician by trade and owned his own electrical contracting business until retirement. He was devoted to his family and enjoyed fishing and singing in church choirs. He never tired of sharing stories of the people, places and events of his life.  Survivors include a daughter, Karen (Marshall) Poole of Hoschton, GA; three sons, Steve (Debra) Griggs of Fayetteville, GA, Eric (Shirley) Griggs of Hickory, NC and Scott Griggs of Lawrenceville, GA; 12 grandchildren and 18 great grandchildren.  In addition to his parents and wife, Bobbie, Edsell was preceded in death by three sisters, Floy Poag, Annie Senter and Clarice Griggs; and two brothers, A. C. Griggs and Orren Griggs.  A celebration of life and memorial service will be held for Edsell and Bobbie at 1:00 p.m. Saturday, August 15, 2020 in the Lawson Funeral Home Chapel. The Rev. Gary and the Rev. Nancy Christensen will be officiating. The family will receive friends at 12 p.m., Saturday, August 15, at the funeral home.  Lawson Funeral Home, 4532 Hwy. 53, Hoschton, GA 30548, www.lawsonfuneralhome.org, 706-654-0966.