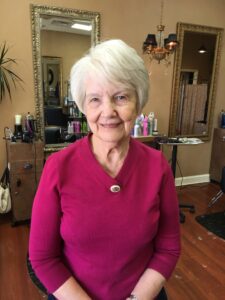 On Sept 23, 1926, the Lord put in motion the humble beginnings of life for Gertrude Effie Evans in Niagara Falls, NY.   The poverty into which she was born was made rich by the love and closeness she had with her siblings; Elsie, Lois, Joe, and Jack. Gertrude soon dropped the formality of her given name and for the rest of her life she became known, to family, friends and co-workers as Trudi. The other ray of promise provided to Trudi in her youth was her connection with The Salvation Army. Through it Trudi found her Savior, her husband Ernie Baxendale, and her calling as an officer.

Trudi and Ernie served with The Salvation Army  in many different capacities and places. Trudi ran the Home League, taught Sunday School and preached on Sunday evenings. And during one season, Trudi became the representative for The Salvation Army’s Christmas campaign and became Captain Merry Christmas.  All of that while raising an Army of their own; Donna Lynn, Carol Gay, Ernest William, Kathy Sue, Karen Ann and Randy Jay.

In 1976 death took her first love as Ernie went to meet his Saviour. Six hard years later, John Rumbarger won Trudi’s heart and life took another turn as John’s three sons were added to the family; James. Kenneth, and Michael.

Although Trudi’s pathway in life was not easy, she rose to meet every challenge with grace and with honor to her Lord. Her gifting as a Bible teacher brought her much joy as she headed the Women of the Word Bible Study, counseled and coached many young women and still managed to find time for her growing family of grandchildren.

On June 2, 2012 “Grandpa John” went to meet his Lord and once again Trudi found herself beginning a new chapter in life. She left Pennsylvania and moved to Georgia to be near her twin daughters. As the years progressed dimentia clouded the once sharp and strong mind. And slowly the family watched as she faded in and out of recollections and responses.

On July 27, 2022, with all of her children surrounding her, the Lord took Gertrude Effie Evans Baxendale Rumbarger’s hand and welcomed her home.

Trudi was the final survivor of her siblings and
leaves behind her children:
Donna Wyatt (Dave), Carol Detwiler (Curt), Ernie Baxendale (Liz),  Kathy Morse (Dan), Karen Bearchell(Dave), and Randy Baxendale (Dawn) and three stepsons Jim Rumbarger, Kenneth Rumbarger and Michael Rumbarger(Jill) their 18 grandchildren and 24 great grandchildren with another on the way

In lieu of flowers, contributions can be made on her behalf to The Salvation Army Territorial Headquarters, 440 West Nyack Road, West Nyack, New York 10994. Or online:
https://easternusa.salvationarmy.org/