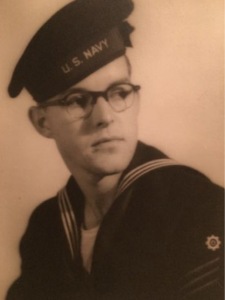 Howard R. Orr, age 88, died on April 12, 2021 at his home in John’s Creek, Georgia surrounded by his loving family.  Howard was born on February 26, 1933 in Corning, New York to Melvin and Winona Orr. He married Mary J. Sementilli on September 10, 1955 at St. Vincent de Paul Catholic Church in Corning, New York. Howard attended Northside High School in Corning, New York and graduated in 1947. He then went on to study at Blackburn College in Carlinville, Illinois before he enlisted in the U.S. Navy Reserves in December 1950. In June of 1952 he was called into active duty and assigned to the USS Paiute ATF-159 where he served honorably and was awarded the National Defense Service Medal. After serving his country, he attended the State University of New York, New York State College of Forestry at Syracuse University majoring in Forestry and minoring in Landscape Architecture earning his Bachelor of Science (Forestry) in June of 1958. He went on to a successful career with the U.S. Forest Service as a Forester and Landscape Architect, where he created and provided public access to the national forests and designed and developed numerous camp sites and recreational areas throughout the United States. Most significant, was Howard’s role in creating the Forest Service’s Visual Resource Guide that minimized the visual impact of clear cutting, controlled burns, and roadway development. In fact, Howard’s contributions are rightfully documented and cited as the birthplace of the Forest Service’s official landscape management program. Howard eventually retired in Gainesville, GA after serving for many years as the Director of the Chattahoochee and Oconee National Forests. Throughout his career, he left his mark across the United States and on top of some of the highest peaks and most beautiful lakes and forests he touched. Howard was even more successful away from work as he was a gentle giant with tremendous skills, crafts, and talents. He was an incredible painter, furniture maker, craftsman, and he enjoyed and loved all types of music. If he needed it, he built it, whether home additions or remodeling, large sailboats, or intricate clocks and mechanisms. Seemed there was nothing he could not create, fix, or do. Most of all he enjoyed his family, sailing, cars, and being with nature. Strong in body and soul with a big heart, Howard was the lighthouse for many who had the privilege to know him. Whether his family, relatives, or friends he was a beacon that guided and the foundation that provided the example of what manhood, loyalty, honor, love, strength, determination, and hard work was. To many, Howard set the example that showed us how to be a man, a husband, a father, a son, a brother, an uncle, a cousin, a grandfather, and a helpful friend – how to do it right, yet in our own way and with creativity and art. What a teacher, counselor, and mentor he was to countless people throughout his life. Of all that he accomplished; it was his wife Mary that he cherished the most. Howard adored Mary as she remained his lifelong soulmate and together, they carved out a very loving and rich life together. In addition to Mary, Howard is survived by five sons and two daughters: Howard (Leigh), Virginia, James (Terri), William (Garol), John (Becky), Susan (Trey), and Chris (Tamara); 12 grandchildren and 8 great grandchildren. We who remain, hold fast to all you taught us, and what we learned from your living. We give you back now, to the earth, the sky, the wind, and the water…to heaven and the unseen. Rest now Howard, you did well. There will never be another light like yours. In lieu of flowers, the family asks that you consider a gift to St. Jude Children’s Research Hospital in memory of Howard Orr or Tunnel to Towers Foundation in his memory. Arrangements by Lawson Funeral Home, 4532 Hwy 53, Hoschton, GA 30548, www.lawsonfuneralhome.org, 706-654-0966.