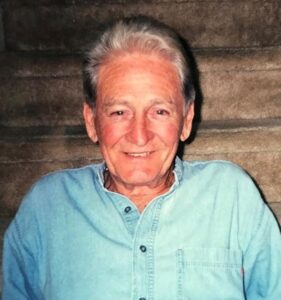 James Joseph Lee (Jimmy) was born on November 22, 1930, in Staten Island, New York to his parents Henry and Margaret Lee. His father immigrated from Cork, Ireland, and his mother was a native of Staten Island, NY.  During Jimmy’s childhood he lived on a half-sunken three masted schooner off Staten Island with his parents and two older brothers, Terry and Brendon. After the birth of his younger sister, Peggy, the family moved to New York City. Jimmy attended school until the 6th grade, and the remainder of his education and wisdom was gained on the hard city streets and the from the Readers Digest. In his youth, he was know by all his family and friends as “Whitey Lee” because of his platinum blonde hair and pale skin.  Jimmy joined the military as a teenager and served in both the United States Army and Air Force. From 1953-1954, he was stationed in a combat zone during the Korean Conflict in which he served as an Airman First Class in the 547th Ammunition Supply Squadron. He was awarded the United Nations Service Medal, Korean Service Medal, National Defense Service Medal, and Good Conduct Medal. He was honorably discharged from the Air Force on October 12, 1955.  Jimmy was married to his beloved Rose Riccardi, with whom he has two children, David and Suzanne. Upon his discharge from military service, Jimmy began working for the New York Transit Authority as a bus driver, where he was employed for 30 years. After the illness and passing of his first wife, Jimmy started dating and fell in love with Carol Jacobus Bostick, who had two daughters from a previous marriage, Kim and Jennifer, whom he loved as his own.  Carol introduced Jimmy to the Church of Jesus Christ of Latter-day Saints in which he was baptized a member on June 28, 1980. Jimmy and Carol were soon married on June 28, 1980, and they later had a daughter, Christin. They were all sealed as a family in the Washington, DC Temple on July 16, 1983.  Upon retiring from the New York City Transit Authority, Jimmy worked for the Brookchester Apartments in New Jersey as a resident manager. He then moved with his family to Palm Bay, Florida to be closer to the ocean and year-round warmth. There, he began working for The Church of Jesus Christ of Latter-day Saints as a facilities manager. Eventually, Jimmy moved his family and settled in Georgia, where he retired and resided until his passing.  Jimmy was a devoted member of his church and loved the opportunity to serve. In 2001, he and his wife were able to serve a mission for his church at the Atlanta Temple. Jimmy loved the ocean, sailboats, fishing, golf, tinkering in auto mechanics, and relaxing in the sunshine. He could always be heard whistling a happy tune.  Jimmy enjoyed spending time with friends and family, and was always ready to make people laugh with his wonderful sense of humor. He was very kind and patient to all those he came in contact with. He was a loving husband, father and grandfather. He always enjoyed Skyping with distant family members.  Jimmy passed away peacefully on September 30, 2020, at home with his family in Hoschton, Georgia. He is survived by his loving wife Carol; his devoted children—David, Suzanne, Christin and stepdaughter Jennifer; his twelve grandchildren—Casey, Danielle, Tommy, Annie, Lianna, Emmeline, Carson, Clara, Owen, Collin, Jacob and Colby; and one great grandson, Jura. He is also survived by his sister Peggy and loving nieces and nephews.  Services will held at a later date privately by the family.  Arrangements by Lawson Funeral Home, 4532 Hwy 53, Hoschton, GA 30548, www.lawsonfuneralhome.org, 706-654-0966.