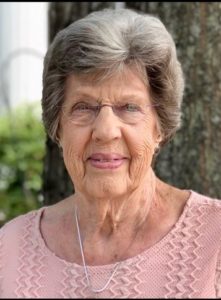 Mildred Dugger, age 88, of Winder passed away peacefully in her sleep after a brief battle with lung cancer on Wednesday, December 18, 2019 at her home in Winder, GA.  She was born in Gordon, NE on July 25, 1931 to Oscar and Christina Anderson. She was one of 6 children. Leonard, Helen, Evelyn, Mildred, Dick, and Kenneth.  Shortly after High School she met and married  Bill Dugger who preceded her in death in 1996.  Bill and Mildred moved many times during their marriage. First to Caracas, Venezuela. Then to Jordon, Montana, Biloxi, Mississippi, Midland, TX, and Jenks, Oklahoma before settling in Conyers, GA in 1976.  Mildred had a love of life and enjoyed traveling and playing bridge. She was an avid bridge player and played every chance she could.  While raising four girls she also worked in retail selling cosmetics and perfume before retiring from Rich’s in 2004.  Mildred is survived by her sister, Evelyn Brehm of  Bremerton, WA. Daughters Terri Dugger, Paula Pyatt ( Leighton), Dana Mitchell (Roger), Marda Keever (Mark) Grandchildren: Abby, Aaron, Austin, Audrey and Samantha. Great Grandchildren: Westin and Adelaide and many nieces and nephews.  A celebration of life will be held on Saturday, December 28 at 11:00 at Epiphany Lutheran Church in Conyers, GA.  Flowers or Donations are welcome to the American Lung Association.  Funeral arrangements by Lawson Funeral Home, 4532 Hwy 53, Hoschton, GA 30548, www.lawsonfuneralhome.org, 706-654-0966.