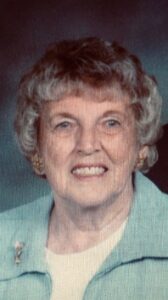 Patricia Ruth McSweeney, age 89, of Jefferson, Georgia, passed away peacefully in her sleep after a long illness on October 25, 2022 at Jackson Oaks Senior Living facility. Pat was born on September 18, 1933 in Muskegon, Michigan to Doris and Art Grover. She grew up in Grand Rapids, MI, where she attended Ottawa High School.  She then earned an Early Education degree from Michigan State University and went to work as a kindergarten teacher. Pat met her husband, Terry, in July, 1956 on a blind date. They were married on July 19, 1958 and became parents to five children.  In her early years, Pat enjoyed gardening, crafting and coaching youth soccer and softball.  She donated to several charities and volunteered with the March of Dimes for several years, as their mission of helping mothers and babies was a cause near and dear to her heart. The family moved to Centerville, Ohio in 1968 and considered that their home for many years.  In 1983, they moved to Littleton, Colorado where they spent 10 years and made many lifelong friends. During their later years, they moved to Ogallala, Nebraska and Cincinnati, Ohio and eventually retired to Savannah Lakes Village in McCormick, South Carolina.  In 2019, Pat relocated to Georgia to be closer to her children and grandchildren. Pat was “Nana” to eight grandchildren: Kelly, Erin, Keri, Kevin, Brian, Alyssa, Ryan and Marcus; one step-grandson: Mitchel; and eleven great-grandchildren:  MacKenzie, Averie, Piper, Finn, Knox, Aiden, Harper, Landon, Declan, Lila and Amelia.  She was preceded in death and reunited with her husband of 56 years, Terry, her son, Mike, and her sister, Sandy.  She is survived by children Sue (Mike) Cox, Hoschton, GA; Sherri McSweeney, Buford, GA; Laurie (Paul) Maloney, Jefferson, GA; Terry (Deb) McSweeney, Hewitt, TX. The family would like to express a very special thanks to those who provided loving care to her in her later years, including the staffs at The Oaks at Braselton, Jackson Oaks Senior Living, Homestead Hospice, and to Dan Drabik. There will be a celebration of Pat’s life on Saturday, November 12th at 10:00 a.m. at Lawson Funeral Home Chapel. In lieu of flowers, memorial donations can be made to The Alzheimer’s Association at www.alz.org. Arrangements by Lawson Funeral Home, 4532 Hwy 53 Hoschton, Ga., 30548. Lawsonfuneralhome.org. 706-654-0966.