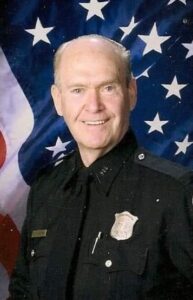 Retired Atlanta Police Sgt Robert “Bob” Gresham, age 76 of Newnan passed away Monday, February 15, 2021 peacefully.  Celebration of Life Services will be held Saturday, February 27, 2021 at 2:00pm in the Mausoleum of Pineridge Memorial Park located at 2950 North Cobb Parkway Kennesaw, GA 30152.  He was born in Jacksonville, Florida on December 7, 1944 to the late Jesse and Nellie Gresham.  After graduation he joined the United States Navy and served until he was medically discharged.  Up until then he was known to all as Harris.  He completed the Police Academy and was hired by the City of Atlanta.  On his first day during roll call his Sergeant announced, “Robert Harris Gresham, where are you Bob”.  He said, “Right here”.  So from that day forward he was known to all as Bob.  He wore badge # 1888 and was part of the Motorcycle Unit, Zone 3 Lakewood Heights .  He retired as a Sergeant and worked with the city post retirement as a consultant.  He enjoyed Georgia Tech football, watching old western movies and spending time with his family.  He is preceded in death by first wife Charlene R. Gresham who passed away in 2011 after nearly 38 years of marriage.  He then married Sara Gresham who passed away just a few days before Bob.  His Son, Dennis Messman.  Brother Jimmy Gresham and Sister Charlotte Hare and Step Daughter Cheryl.  Bob is survived by his Son, Robby Gresham and Wife Vanessa of Newnan, Ga;  Daughter Christine Gresham of Stockbridge, Ga; Daughter-in-Law Shelby Messman of Panama City Beach, Fl;  Sister-in Laws  Doris Ragsdale Dickens of Beverly Hills, Ca and Suzanne Sale of Atlanta, Ga;   Brother-in-Laws;  Bobby Ragsdale of Atlanta, Ga and Paul Ragsdale of Newnan, Ga;  Grand Children Brandon, Trey, Dustin, and Dalton Messman all of Panama City Beach, Fl.  Trenten, Madelyn, Matthew Gresham and Elisabeth Gresham all of Atlanta, Ga  Ricky Ranel, United States Navy;  Great Grand Daughter Lilly Gresham.  Stepsons; Danny, Steve and Matt Hixson all of Atlanta, GA.  He will be placed next to his wife Charlene in the mausoleum at Pine Ridge Memorial Park in Kennesaw, GA with Full Police Honors at a time that will be announced later.  In lieu of flowers donations can be made to Homestead Hospice, 10888 Crabapple Road Roswell, Ga 30075 in memory of Bob Gresham.  Lawson Funeral Home is in Charge of Arrangements, 4532 Highway 53 * Hoschton, Georgia 30548 * 706-654-0966 * Please visit on website to send online condolences to the family at www.lawsonfuneralhome.org