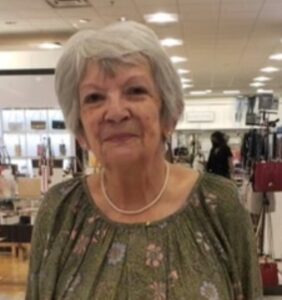 Sharon B. Parker, age 83 of Winder, GA, passed away April 15, 2022 peacefully at home surrounded by her children. She was the daughter of the late Earl and  Libby Buckelew. She was preceded in death by her husband Robert H. Parker, sister, Sandra B. Hatcher, grandsons, Joey Parker, John Parker, and bonus grandson Eric Poteete. She was retired from Scientific Atlanta after 30 years. She was then a volunteer and worked in the ER at NEGH for several years. She was a long standing member of Winder First Baptist Church and was involved in many church activities. She is survived by her children, Terry (Kathy) Parker, Connie (Robert) Poteete, Cathy (Sam) Byrd. grandchildren, Jason (Diana) Thayer, Jeremiah (Laurie) Thayer, Jeff (Emily) Byrd, Justin Byrd and Stephanie Schmehl, Jason (Jamie) White, and Michelle (Cartis) Higginbotham. She had twelve great grandchildren, and several nieces and nephews. The family will receive friends: Monday, April 18, 2022 from 1:00 pm to 2:00 pm with a memorial service starting 2:00 pm at Winder First Baptist Church.  Pastors Jack Thomas and Chad Mantooth will be officiating.  Interment cremation. In lieu of flowers, donations may be made to the Alzheimer’s Association.  Arrangements by Lawson Funeral Home, 4532 Hwy 53, Hoschton, GA, 30548, lawsonfuneralhome.org, 706-654-0966.

5 thoughts on “Sharon B. Parker”