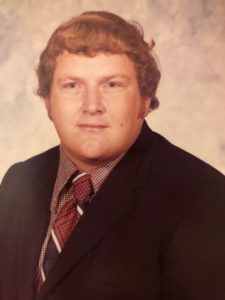 Mr. William Carl McGinnis (Bill), of Gainesville went to his heavenly home on Wednesday, November 13, 2019.  Bill was born January 26, 1947. He was the son of the late Theron C. and Gaynelle ( Grier) McGinnis. Bill accepted the Lord into his heart as a young preteen when attending Pine Crest Baptist Church. He later attended Chestnut Mountain Presbyterian and most recently Poplar Springs Baptist Church.  Bill was a member of the 1965 South Hall High School Class. He was able to attend his Fiftieth Class Reunion and was looking forward to his 2020 55th reunion. He was known among SHHS supporters as the best kicker around scoring the point that won a region title in 1965. After high school he attended Lanier Technical College and was one of the first graduates and a part of its beginning as a place of skilled higher learning. He excelled in the machinest program. While completing his machinist degree, he began working for Chicopee, a part of Johnson and Johnson Company. The Chicopee employment allowed him to grow as a very skilled machinist.  Bill loved to watch football ( Atlanta Falcons), baseball ( Atlanta Braves) and attend NASCAR races as long as his health allowed him.  Bill cherished his time with his family and friends and never complained about the many health challenges he faced. He is survived by his wife of 46 years, Leigh and his daughter Amber (Jamie) Duran and the “apple of his eye “ granddaughter Stella Kate Duran. He is also survived by his brother, Doug McGinnis, his sister-in-law Sherry Davis and her family, Zach (Lindsay) Davis ,Thomas Lanier and Rae Marie Davis. They all lit up his world. He leaves behind a special cousin, Cheryl Satterfield and her family as well as his lifetime buddy Jerry McClure and family.  Funeral Service will be held 2:00 pm Saturday, November 16, 2019 at Lawson Funeral Home Chapel. The Reverend Scott Wilson will officiate. Interment will follow at Memorial Park Gainesville.  The family will receive friends 4:00 pm to 6:00 pm Friday, November 15, 2019 at Lawson Funeral Home Chapel. The body will lie in state one hour prior to the funeral service.  The family will accept flowers or requests donations be made to building fund at Zion Hill Baptist Church, 4100 Falcon Parkway, Flowery Branch, Ga., 30542 or to Poplar Springs  Baptist Church, 3104 Poplar Springs Church Road, Gainesville, GA 30507.  The family wishes to acknowledge the Guardian Home Health care team and his health care providers who worked with Bill. His favorite hymn was “ Turn Your Eyes Upon Jesus”. His hopes and prayers are for all of us to do the same.  Funeral arrangements by Lawson Funeral Home, 4532 Hwy 53, Hoschton, GA 30543, www.lawsonfuneralhome.org, 706-654-0966.