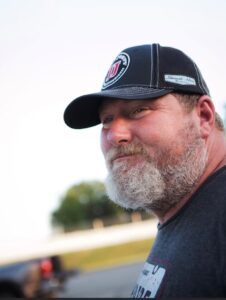 Johnny Ray Wilson, age 48 of Winder, Ga passed away Wednesday, April 7, 2021 near Tuscaloosa Alabama. Johnny was the father of 7 children and had 15 grandchildren. Johnny loved his family more than anything and spoiled his grandchildren as much as he could. Johnny worked with Joyride and managed the fan transportation division and drove the country doing what he loved. Johnny was an avid fan and enjoyed having his children come work the races with him, as they could. Johnny was known from coast to coast and had friends in almost any city that he travelled. Johnny was ever the jokester and had a big bellied laugh that would lighten up the darkest of moods. Johnny was a kind soul and would give you the shirt off his back. Johnny was loved deeply and will be greatly missed by both his family and the many friends he made over the years. Johnny was a legend in his own right, he was always rubbing shoulders with celebrities and he never missed an opportunity to find his way into pit lane on race day. Johnny is survived by his wife Sandy Wilson of Winder, Ga; children Justin Wilson, Sydnie Wilson, Jacob Wilson and Erica Wilson all of Winder, Ga.; Johnny Ray Wilson Jr of Elkhart, In, Joshua Wilson of Greensboro, Ga, and Joey Wilson of Moody, Al; mother, Linda S Wilson; sister Tammy L Wilson;  brother Jimmy Wilson all of Winder, Ga; and a number of nieces, nephews and many relatives that he cared for deeply. He was preceded in death by his father James Leonard Wilson. Funeral services will be held 11:00 am Monday, April 12, 2021 at Lawson Funeral Home Chapel.  Pastor Bobby Smith will be officiating.  Interment to follow at Barrow Memorial Gardens, Winder, GA.  The family will receive friends 6:00 pm to 8:00 pm Sunday, April 11, 2021 at the funeral home.  Johnny will be missed all across this country and the family welcomes all to come and pay their final respects. #DoitforDale. Funeral arrangements by Lawson  Funeral Home, 4532 Hwy 53, Hoschton, GA, www.lawsonfuneralhome.org, 706-654-0966.